Comments Off on Dispatches from Capitol Hill: #4, or What is transcription, really?

Dispatches from Capitol Hill: #4, or What is transcription, really?

Evolving from our discussions of XML and TEI on Monday, during Tuesday’s session the EMDA Institute we moved to a consideration of what it would actually mean to be in charge of projects geared towards the production of such XML documents. Using Heather Wolfe’s idea of an “Early Modern Manuscripts Online” (and the grant to fund the production of such a beast), our group moved through a sort of thought experiment on what a project would entail, from the ground up. In other words, what does it take to produce a useful (and, possibly, accurate) model of early modern manuscripts? What needs to happen behind the scenes to ensure that such a resource is usable by scholars, students, and the like?

To ground our inquiry, we were presented with a group of manuscripts, collected by Heather Wolfe, to transcribe and begin encoding using any schema or tagset we felt appropriate–not following TEI standards, in other words. Drawing from this group of digitized manuscripts in Luna, the Folger’s digital workspace, Scott Trudell and I began to work with a single page of a single document: 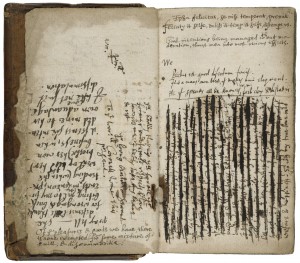 (See the document in Luna here)

As we soon noted, we had (somewhat deliberately) chosen very complex document. At first glance, this miscellany has some difficult characteristics: large blocks of writing are upside down, oriented towards each edge of the codex, writing is crossed out, there are numerous hands, etc. We began by trying to understand what we were seeing–a task complicated by the fact that we noticed the Folger’s own system seemingly refused to organize all the pages of the manuscript in the correct order. Things begin without a hitch, but about halfway through the image set (the entirety of which can be seen here) the writing suddenly switches to upside down, then back again, starting with what seems to be another front leaf. Finally, we figured out–with some aid from Heather–that the Folger photography department, when reaching the midpoint of the codex where writing changed from right side up to upside down, had actually flipped the book around and began photography the “upside down” writing right side up from the back of the book. Thus, our page that seems to be the second leaf of the book is actually the second to last! And all the writing that seems upside down is, when reading from front–>back, right side up–and vice versa.

Although we began with a single page, our widening our scope of inquiry radically changed how our interpretation of that single page; we had already transcribed, as best as possible, the text. When discussing encoding options, we had initially reasoned that the bizarre presentation of this page would be suited to something like the TEI suggested guidelines for Encoding Genetic Editions, a set of suggestions that attempt to capture the presentation of a page and the placement of textual elements in spatial terms (via the description of “zones” of text identified through a coordinate system). Without considering the codex volume as a whole, however, our assumptions about textual orientation, direction of writing, and a set of coordinates describing the page itself would have been entirely reversed.

Or would it? Folger practice is actually to treat bound manuscripts in which writing reversed direction (ie, written from front to back, then flipped around and written from back to front, meeting in the middle) as parts I and II of the same document–even though they are contained within the same codex. With this in mind, what is the reason for not beginning reading from the “back” of the codex? It would likely be dozens of pages before you encountered “upside down” text. What makes this image the first pages of the volume? (with “right side up” and “upside down” text) 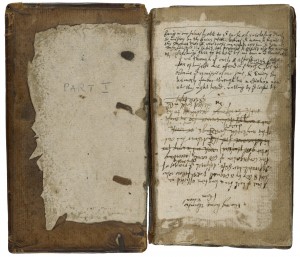 While this image is the “back” cover? (this text is only “right side up”) 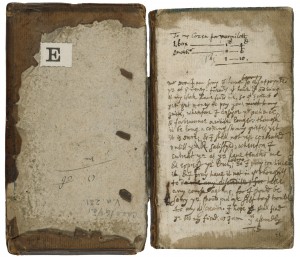 These are perceptual distinctions and critical judgments, but they are the interpretive acts on which encoding depends. What text in this volume is not “correct” or “usual” and should be marked as such in encoding? This manuscript presents a technically easy but analytically difficult crux, within which our assumptions about the conventions of print come to the forefront. In manuscript culture, to a user or a reader, perhaps there was no “right” way to use this volume in any objective sense, but only a “best” way for a particular moment in time? Encoding, by forcing us to confront this manuscript in slightly different terms, perhaps underscores the contingency of norms that we have come to expect from early modern materials: those norms are inherited from 500 years of print culture (an argument Walter Ong would appreciate, I’m sure), and our encoding practices are very often constructed around those expectations.

I should note that the TEI is actively working to rectify this situation; there is a Manuscripts Special Interest Group devoted to confronting several of these issues, and the P5 Guidelines contain a large section breaking down how to describe and encode such documents, what elements to use, best practices, and so on. Closely related is the next section, recommending how to represent primary sources in XML. Obviously, work in the area is ongoing, and my former colleague Malte Rehbein is intimately involved in these efforts, and would no doubt love to hear from you. 🙂

In the meantime, manuscript transcription and encoding reveal that our technical standards and practices are very much still in development and not necessarily ideal of manuscript documents. Add to that handwritten script rather than type, extraordinarily complicated authorial practices rather than a (supposedly) direct line of transmission for author to printer, and the inclusion of non-textual features, the difficulties of transcribing manuscripts, much less encoding them, become apparently. I can only hope that Heather & the Folger Manuscripts Department get their grant so we can keep discussing these issues for years to come.