Dispatches from Capitol Hill: #2, or EEBO and the Infinite Weirdness

Today at #emda13 (as Early Modern Digital Agendas has become, bowing to the necessity of a convenient hashtag), we discussed Early English Books Online and the English Short Title Catalogue with Ian Gadd (of Bath Spa University) and Deborah Leslie (Folger Shakespeare Library). Although our discussion began with the English Short Title Catalogue and EEBO as a jumping off point, we quickly went down the rabbit hole of both EEBO history and the very odd corners both scholarly resources contains.

EEBO and the ESTC both have complex and tangles histories (and sometimes an entangled history as well) that was so complex I’m sure I missed half of it. Perhaps most intriguingly, when we consult about the seemingly very digital ESTC, we are actually consulting a resource that began with Edward Arber’s 1875 Transcript of the Register of the Company of Stationers of London; this project morphed into the Catalogue of Books in the Library of the British Museum (1884), which eventually turned into Pollard & Redgrave’s Short Title Catalogue printed in 1926–since revised later in the 20th century. This STC was followed when University Microfilm International (UMI) began photographing early modern texts in the 1930s and 1940s, in the face of World War II. Eventually, the STC morphed in to the ESTC (which originally stood for *Eighteenth* century STC) in the late 1980s.

The hidden corners of EEBO (which originally called on the ESTC for bibliographic information). Rather than focusing on the history of Early English Books and the movement of the project from preservation to active research use and from microfilm to PDF facsimiles, I’m going to throw up some interesting screenshots of weird corners we found today through some pretty odd searching patterns. For instance, EEBO contains a text by New England Puritan Cotton Mather, half in English and half in Algonquin; titled “An epistle to the Christian Indians, giving them a short account, of what the English desire them to know and to do, in order to their happiness,” the text features facing paces in alternate languages. Besides being in Algonquin, the text is from what became the United States, as are the other 10 texts featuring Algonquin. This group of texts range in publication date from 1659 – 1700 and are quite strange to most scholars of early modern England. 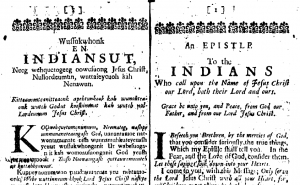 Looking through the languages of EEBO is fascinating; the database contains Arabic, Chinese, Aramaic, Hebrew, Ethiopic, Malay, Syraic and Turkish. These texts are few and far between, but include some gems like the first Turkish grammar ever printed in England, the Grammatica linguae turcicae in quinque partes distributa printed at Oxford.

Searching for only Speech Headings in EEBO (an option under the “Limit full text searching to keywords within . . .” box) yields numerous unexpected results–few of them speech headings. Indeed, manuscripts, especially from the Harleian Manuscript Collection, are quite prevalent. This text proposes a debt remission if Scotland should join the UK, in beautiful handwritten script. It is unhelpfully dated anytime between 1 and 1707 AD, and carries no bibliographic number–only a UMI reel position, Tract Supplement / C7:3[2]. 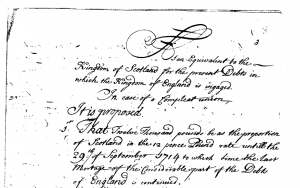 Finally, it seems important to realize that EEBO is quite prone to error, loss, and confusion–especially since it’s based on microfilm photographed in the 1930s-40s based on lists compiled in some cases the 1880s. I came across this last image on EEBO yesterday, although I can’t remember where now; pages were missing from the middle of a printed text, and instead, EEBO (or likely EEB) staff had inserted an indicative card.

All of which is to say, EEBO is full of mysterious texts, unexpected formats, languages you never thought to see, and breakages in the sleek promise of “digital facsimile page images of virtually every work printed in England, Ireland, Scotland, Wales and British North America and works in English printed elsewhere from 1473-1700 – from the first book printed in English by William Caxton, through the age of Spenser and Shakespeare and the tumult of the English Civil War.” 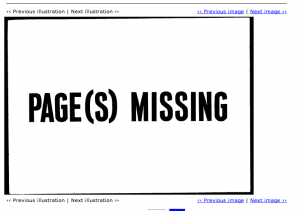 Inserted into the middle of an EEBO facsimile.